The Compton Photon detector consists primarily of a scintillator crystal and a PMT which receives the backscattered compton photons from the chicane. In addition to the main detector there are also two finger PMTs arranged perpendicularly to each other which aid in centering. Both are mounted atop a unistrut frame on top of a movable table. The operation of the detector and table is laid out on this page: 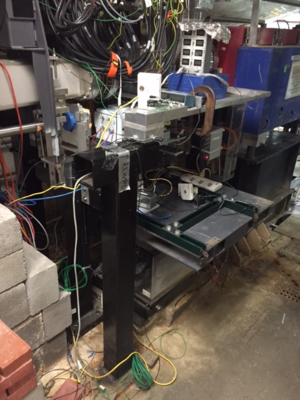 Usually, it'll only be Y that needs to be moved. To move the table, check that:

The lockout position is the same as the home position (poor design).

To jog it by hand away from the home position:

Centering on Beam on Laser

After finding collisions, ask MCC to lock the position in the table BPMs. Then begin the detector-centering procedure:

We have several power strips under our control.

Plugged into outlet eight of this power strip is the power strip for the photon detector table. This includes the power supplies for the jaws, and pulser controls. Can switch off in emergencies.