We prefer to have GE180 glass as part of our glass to metal seals mainly to cut down on helium permeability thru the glass material. Approximately, the density in a typical 3He target cell will drop 10% every two months for Pyrex but only 10% every 100 years for aluminosilicate (ie. C1720 or GE180). We asked Larson Electronic Glass to experiment with sealing GE180 glass to their metal tubes. They successfully performed the following in house:

The company Materion Electrofusion supplies various purity Be foil for the X-ray window industry. They provide the following grades: 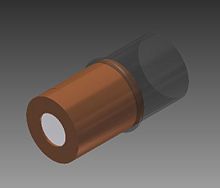 3D view of conceptual design of a possible Be window.

Initial efforts at UVa to determine Be-window feasibility included providing Materion Electrofusion with a proposed Be-window end cap design in Feb 2012. They could produce a copper frame onto which the beryllium foil material would be fused using a silver based braze. Then the copper frame would be electron beam welded onto the copper-glass seal. This two step process is necessary to avoid melting the glass on the seal if one were to braze the window on directly. Also, since the Be-window aperture is to be smaller than the diameter of the glass-metal seal, a frame is necessary to accommodate the beryllium foil via their proprietary coupling method. The cost for small (large) quantities is approximately $1900 ($1100) each window assembly with 10 mil (0.010-inch) thick PS-200 material. An actual order has not yet been placed (as of April 2012).