This article also serve as part of spin flip manual. 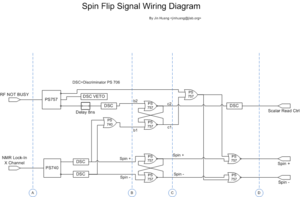 The target logic electronics is designed as a standalone system, capable of extracting spin state information from target NMR signal induced during spin flip. The significance of this subsystem is that, in some unexpected case that the target computer should be down, these electronics could still keep a record of target spin information and ensure spin signal to DAQ is valid.

As shown in the electrical diagram and timing diagram,

The spin signal will be distributed to DAQ system and

The signal distribution scheme are